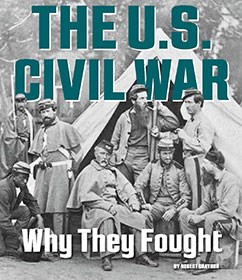 In short, why was the Civil War fought? was a question that should be asked by any American citizen. The conflict over slavery began because southerners argued that the North was encroaching on the rights of individual states. The idea was that individual states should override federal powers. To this end, southern officers in the U.S. Army and Navy overwhelmingly resigned to fight for the Confederacy. For these southerners, slavery was their most important right.

During the 1859 conflict, John Brown, an abolitionist radical, developed a plan to attack a federal armory in Harper’s Ferry, Virginia. His objective was to arm slaves on nearby plantations. While Brown had a plan, it failed miserably. Few slaves in the area were aware of the raid and feared for their lives. Fortunately, a passing train signaled the government and soon local militia troops surrounded the abolitionist.

What was the cause of the Civil War? Both sides contested the right to keep slaves. The Confederacy controlled the majority of territory in eleven southern states. The Southern states, or Confederate, controlled two more states. Both sides raised large conscription and volunteer armies to fight the war. These forces led to mass mobilizations and the eventual end of slavery. If you’ve been wondering why the Civil War occurred, it’s time you read about this conflict.

The Union had a large industrial base and a larger population. The South did not have the resources to stand toe to toe with the Union. In recent history, insurgent movements and underdogs have been successful in winning wars over mighty powers. In the case of the Civil War, the Southerners did not adopt an insurgent strategy, but instead formed large formal armies. They also faced federal troops in pitched battle.