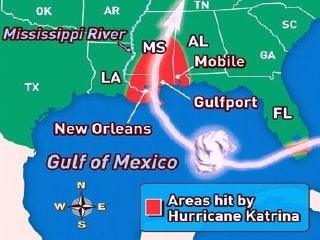 Where did Hurricane Katrina hit? That question has a resounding answer in New Orleans, Louisiana. In the late August 2005, Hurricane Katrina struck the city and caused over $125 billion in damages. Those who survived the hurricane are lucky to be alive. Many others, however, were not so lucky. We’ve all heard countless stories of people who lost everything in the aftermath of the storm.

Katrina began in Florida and made landfall there. It was later downgraded to a tropical storm as it plowed through land and headed northwest. It then moved through the Gulf of Mexico and made landfall in southeast Louisiana near the town of Buras. The storm swept millions of people from their homes and left a trail of destruction. Here’s where Katrina hit, and what happened afterward.

Hurricane Katrina made landfall near the Mississippi-Louisiana border as a Category 3 hurricane on August 29, 2005. Its winds sustained 125 miles per hour, and its pressure was nine hundred and twenty millibars. It continued to intensify as it made landfall, going back over the ocean for a short period of time. Despite the devastation and loss of life, Katrina still managed to cause over $100 billion in damage and lost more than 2,000 lives.

New Orleans was built on swamps and marshland. The area’s gradual lowering was caused by natural subsidence, and the city was only one or two feet above sea level at its landfall. On Aug. 29, 2005, Hurricane Katrina made landfall in Louisiana after passing over Florida as a Category 1 hurricane. Once it reached the coast of Louisiana, the storm weakened and passed into the Gulf of Mexico. It died in Mississippi and Louisiana.